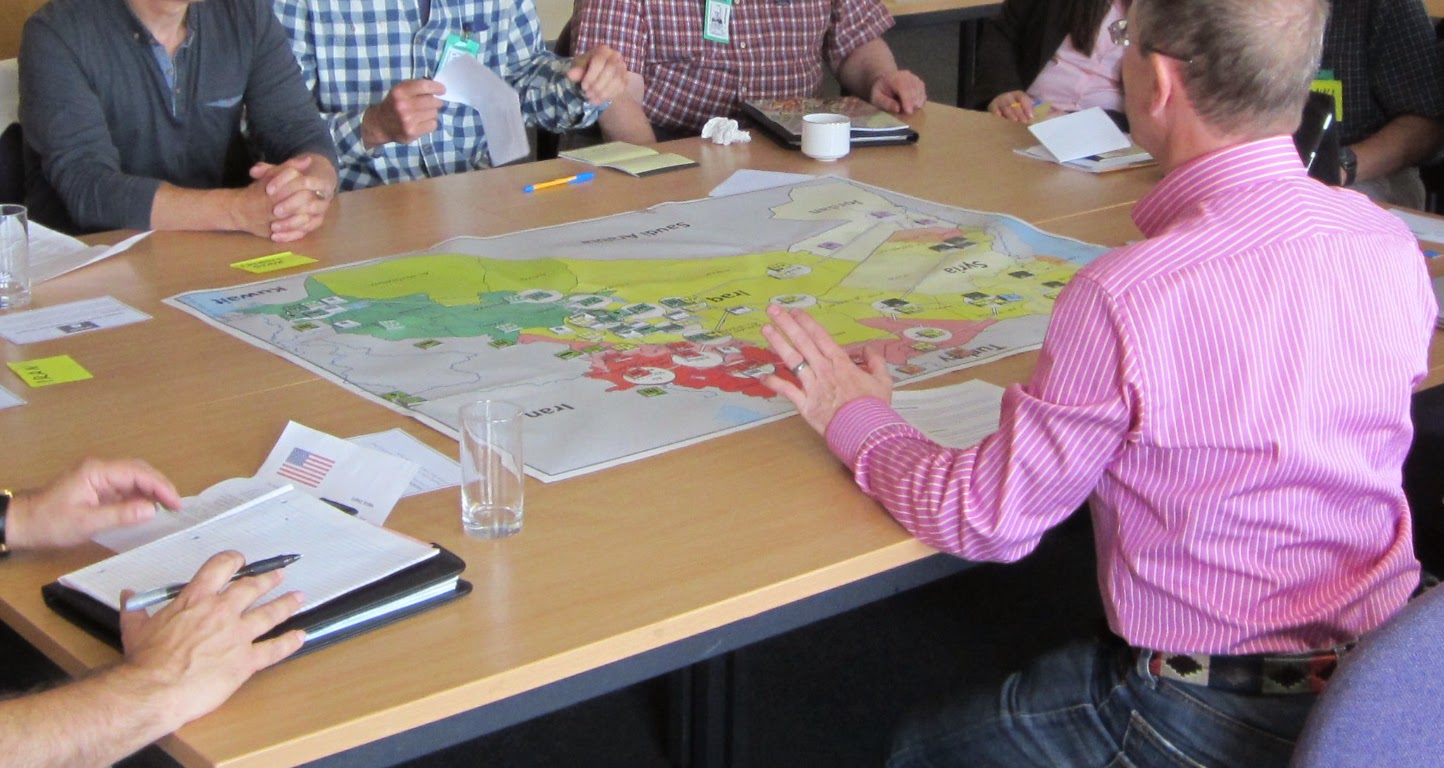 The wargame was carried out at the Defence Academy, UK at the end of August 2014. The participants were military, academics and specialists in international matters from Canada, USA and the UK. The session is reported under 'Chatham House Rules', where individuals may not be attributed.
Although the term ‘game’ is in the title, the wargame was played to explore the situation and the test the methodology of Matrix games. The game was in the serious game space and was not being played for recreation.


The ‘flavour’ of matrix game being used was: Player’s stating action and its outcome, with as many supporting reasons as possible, these were others allowed to give arguments to increase or decrease the chance of failure. Strict umpiring stopped the situation turning into a debate. To succeed matrix games need to move quickly.
For further explanation of Matrix Games and further examples see Matrix Games for Modern Wargaming Developments in Professional and Education Wargames, Innovations in Wargaming Volume 2 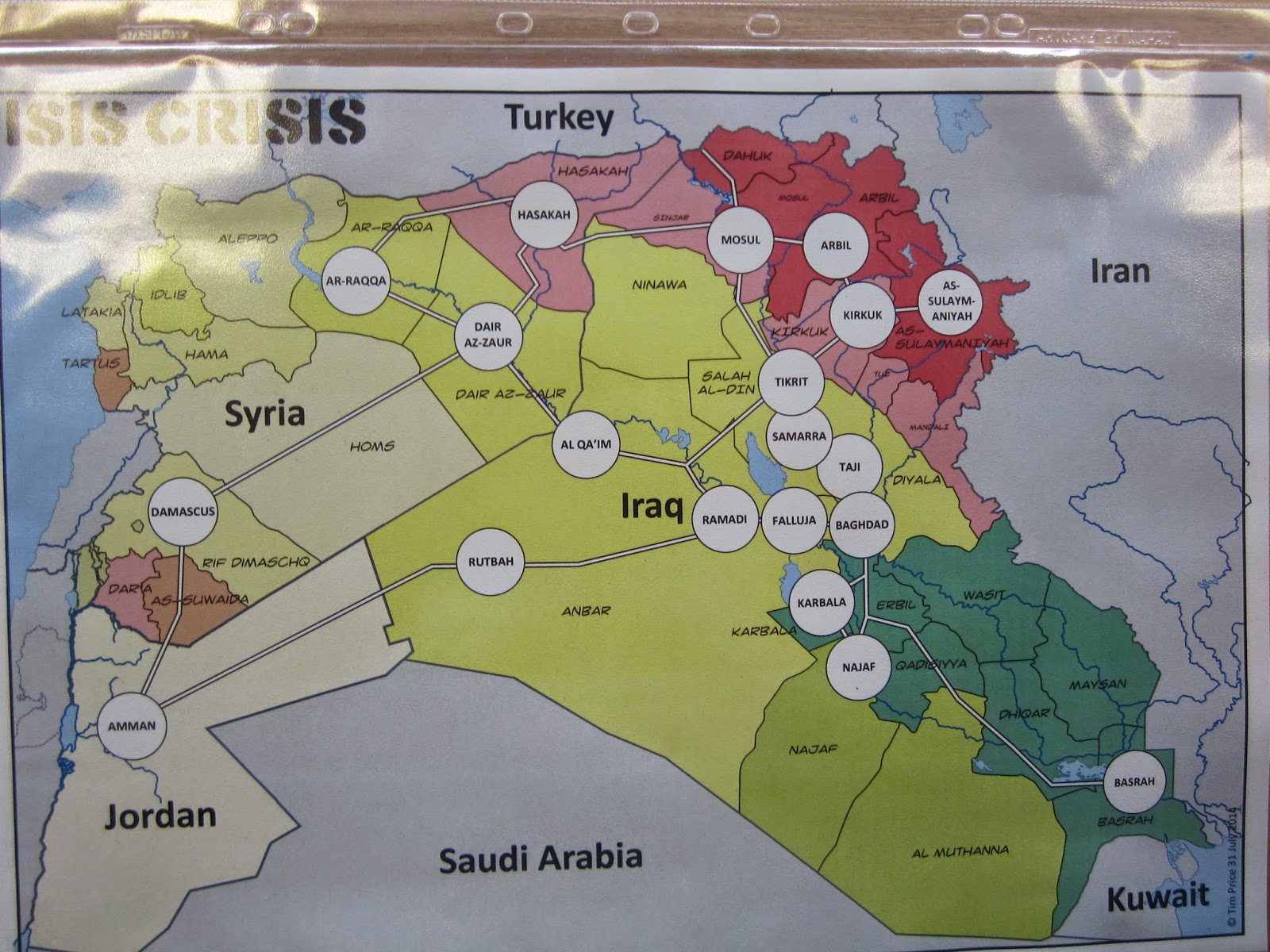 What to include on the map and what not to is a critical pre-game decision.
The map was populated with counters as narrative devices; visual aide memoires rather than accurate statements of military units. The choice of map and counters influence the direction of the game. E.g. Syria was not really shown and so the game failed to reflect the strategic depth of ISIL in Syria. 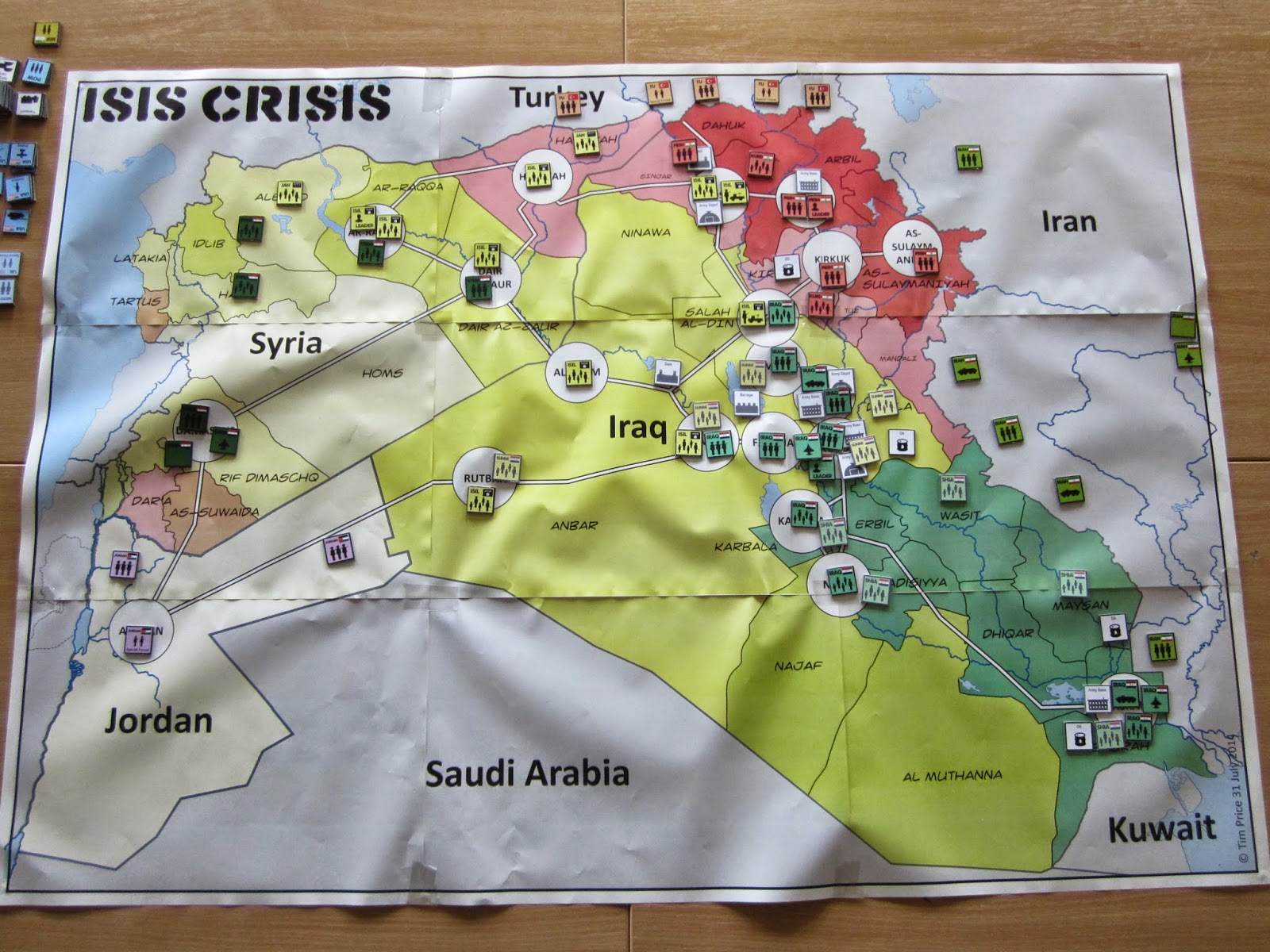 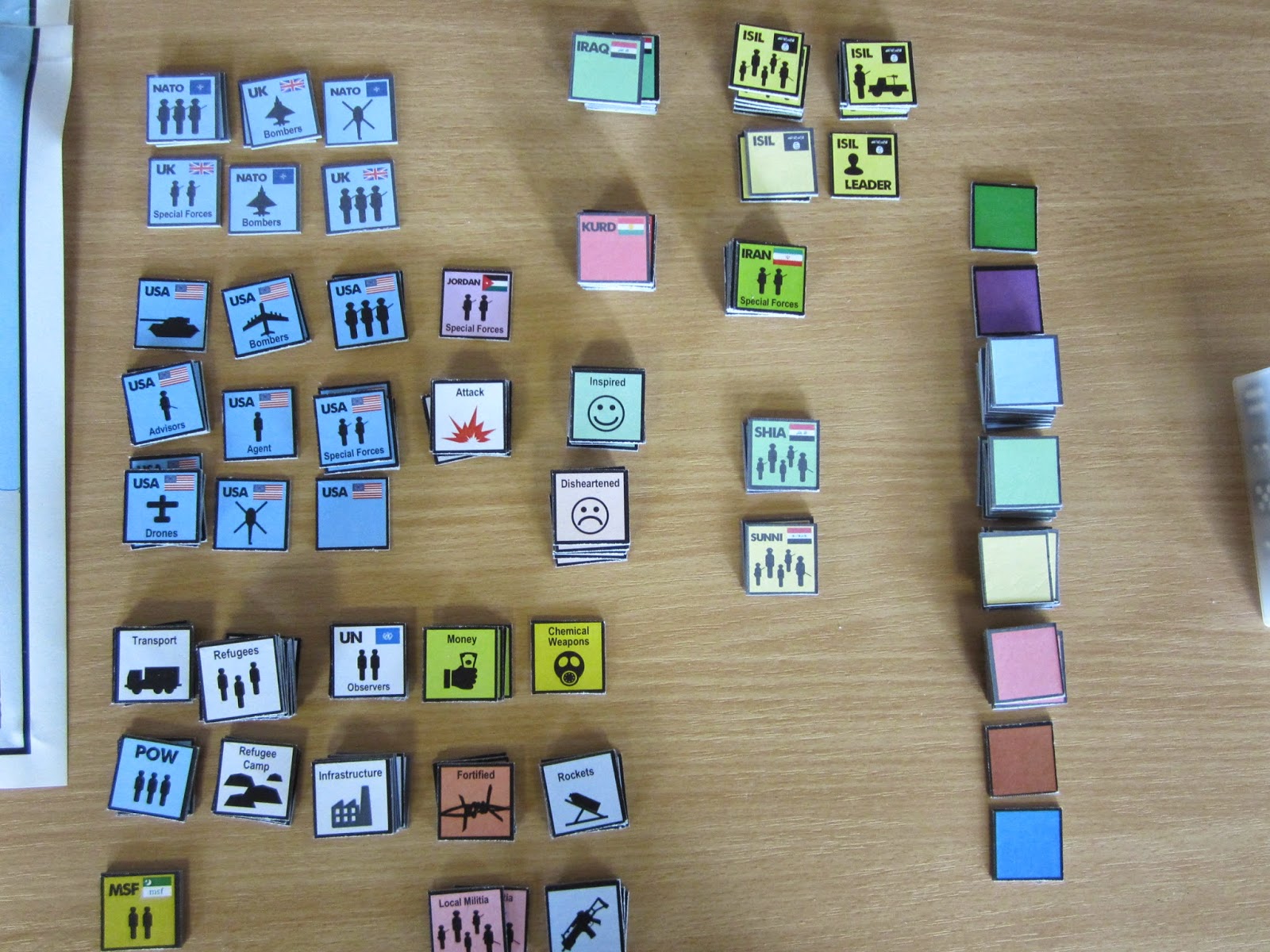 Players could argue for additional counters to be generated upon demand, such as mobilising more militias.


The decision was to represent the USA/ Iran/ IS/ Iraq Prime Minister/ Iraq Shia’s and the Kurds in this particular game.


The game director also threw ideas into the situation, for example representing non-player assigned factions. The aim of the game was for players to attempt to create a narrative and if possible build onto the existing narrative.


The players read their hand-outs and then set their own objectives, based on discussion as each faction was represented by two people.  The dynamic of introducing a 2nd player into each role was a useful one, but it needs strong moderation to keep the momentum of the game up.


Game Turn 1: The amount of time each turn represents was abstract, but the players generally understood that in this game, each turn was a few weeks.


The Americans opened the game by failing to launch airstrikes against IS forces. Political indecision, lack of clear targets, no forces on the ground to direct the strikes etc… (Perhaps reflecting the real world current indecision of the USA). Iran was the opposite and they started to deepen the relationship with Iraq by dispatching another ambassador, clearly they had some long term plan.


IS decisively moved on to Karbala, despite logistics problems caused by bypassing Ramadi, they rolled a double 6 on two dice and the outcome was the Iraq army fled and a very surprised IS was in charge of the town. 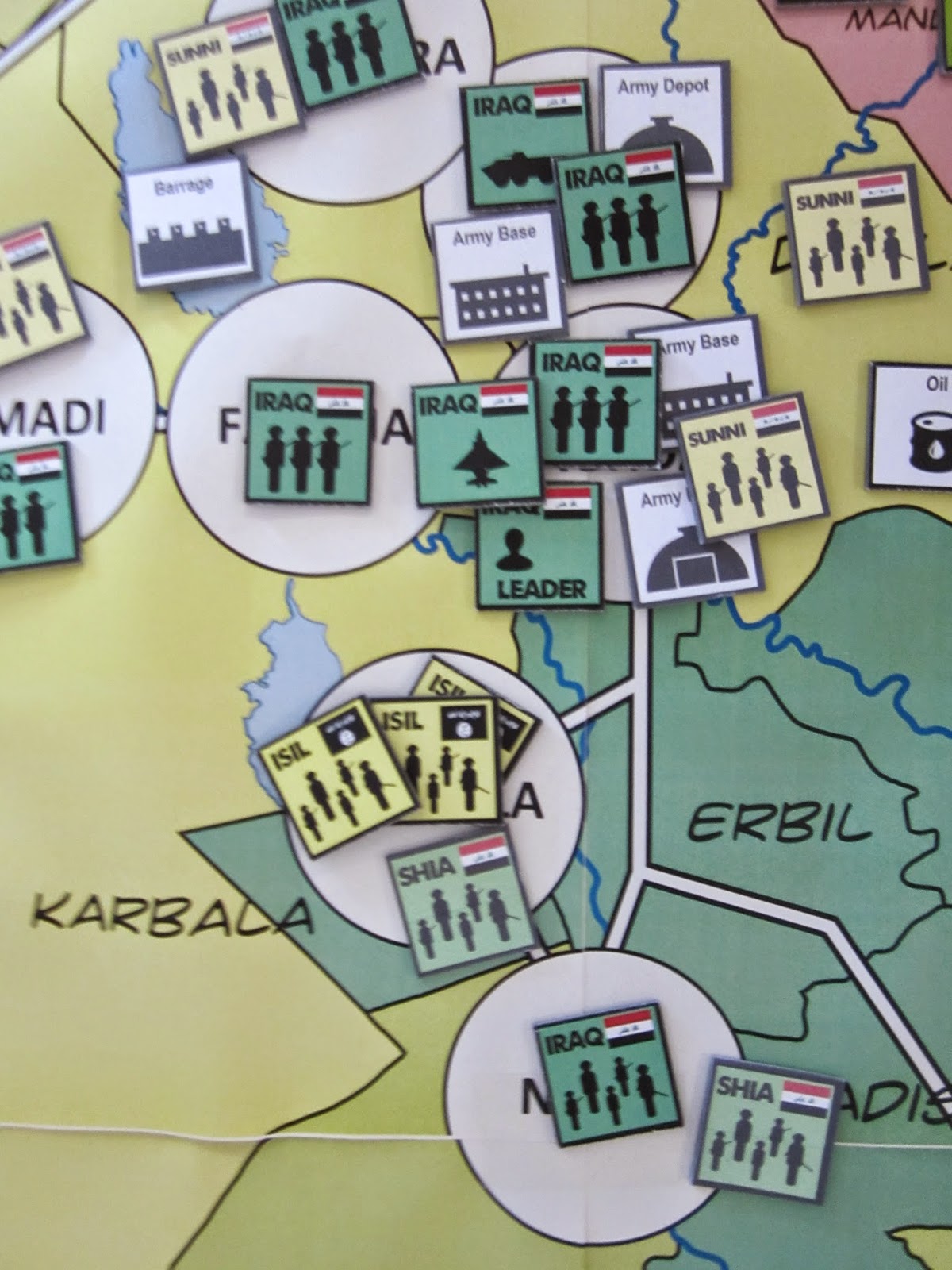 Although the Iraq Army had fled, IS was still faced with local Shia Militia. After the game, it turned out this was actually a feint by IS to distract attention from their real plan of spreading their influence into other countries starting with Jordan.
The Iraq Prime Minister continued to attempt to form a government of national unity, they felt it was essential to get the government working efficiently if they were to deal with the growing crises.


The Sunni minority carried out a somewhat random attack on a US warship in port with the somewhat optimistic aim of keeping the USA out of the Iraq civil war. Historically, such minor attacks have been ineffective politically, but the Americans never forget those who have attacked the.


The Kurds argued that British and NATO Special Forces moved into the Kurdish region to liaise with them. They were clearly thinking a few moves ahead. One of the ways of success in a matrix game is to spend one or two arguments laying the foundation for future moves. In this case, the Kurds want to attack but were making preparations first. 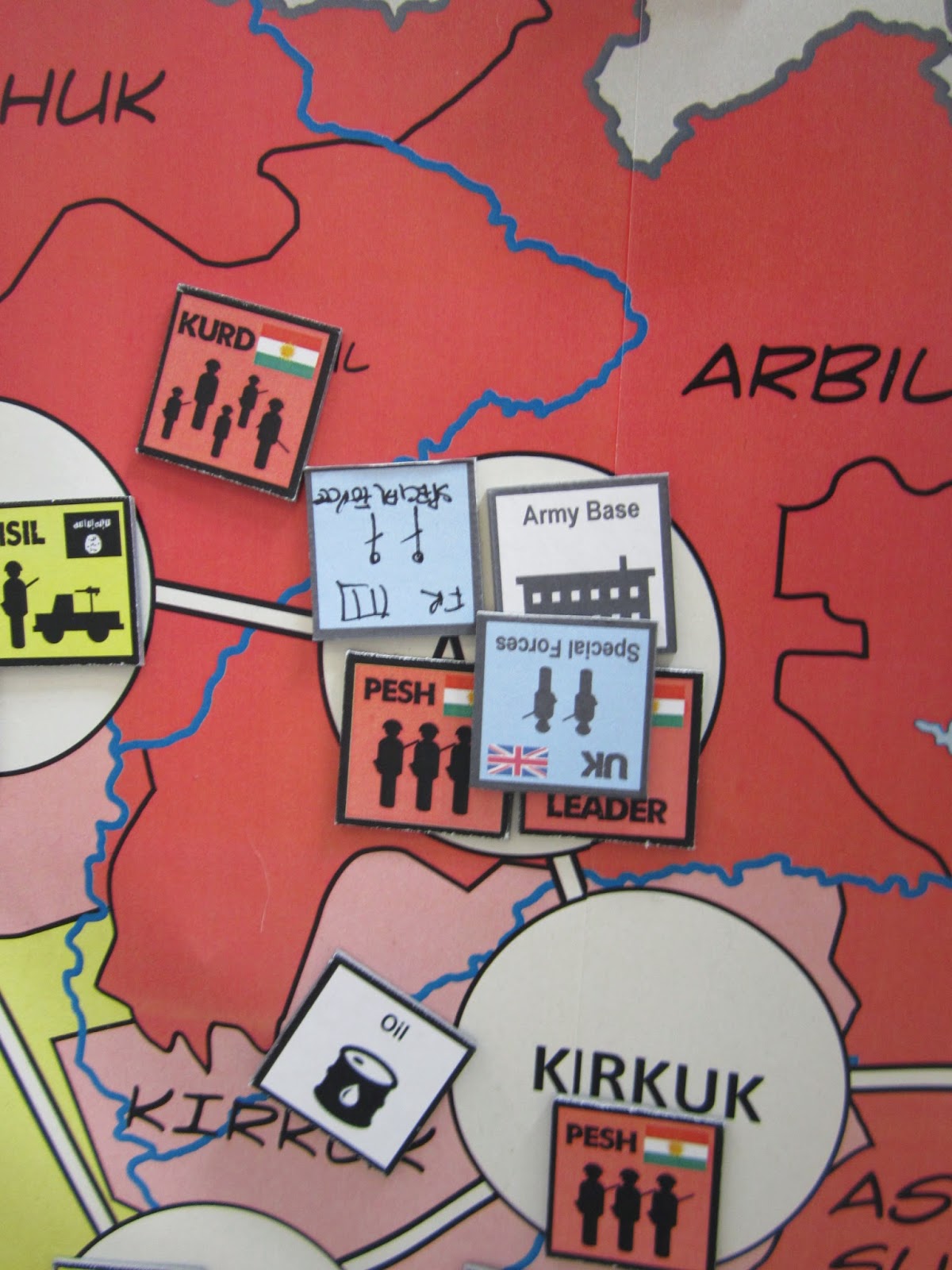 One of the advantages of matrix games is they allow the players to alter the game beyond that of the original design. In this case the player argument for French Special Forces forced the game facilitator to improvise a new counter.

Game Turn 2 One of the post-game discussions was the idea that the game could be run for one turn to allow those who are unfamiliar to have a go at the game, then the clock is reset and the game starts again, with everyone familiar with the game methodology.
The USA dispatched its special forces into Iraq, but the state of the Iraq government meant they only got as far as Bagdad with no authorisation to enter the rest of the country.

Iran introduced rumours their troops were entering Iraq to provide support to the Iraq government.


IS took the opportunity to secure Karbala. In game terms this was resolved using the SCRUD method of combat (basically comparing dice rolls), but whether a simple dice roll would have been enough to achieved the same outcome was discussed. 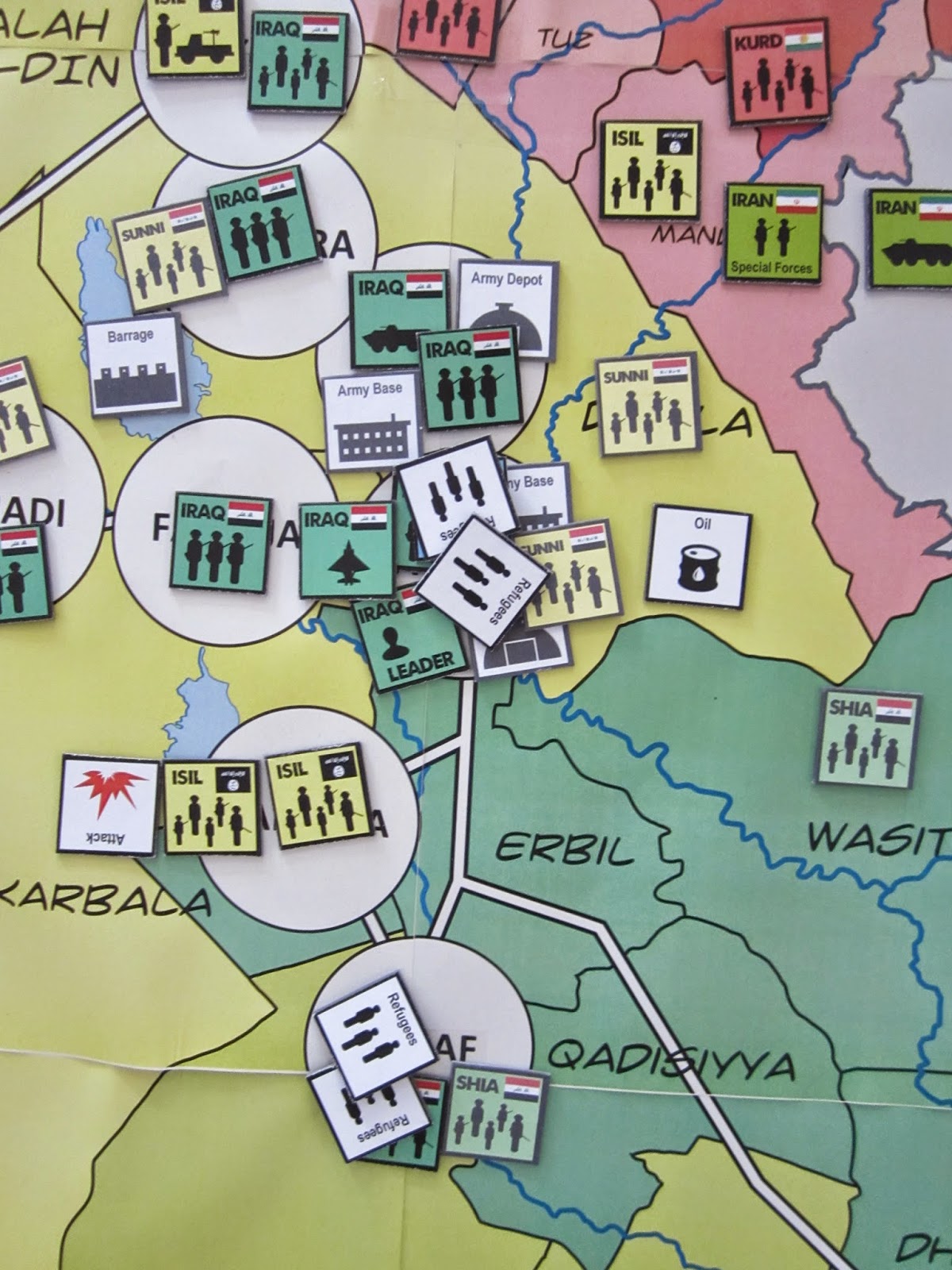 The photo shows ISIL in control of Karbala. Note the attack counter to act as a visual reminder to players. Refuge counters in white indicate local people fleeing the fighting.


The Iraq PM, now a coalition government of sorts had been agreed, mobilised Shia militias to retake Karbala. The Sunni minority also tried a call to arms, but disorganisation and fear led to a poor turnout.
The Kurds received heavy weapons from Iran, with military advisors to help them use their new weapons effectively. The Kurds were now ready to drive ISIl back. 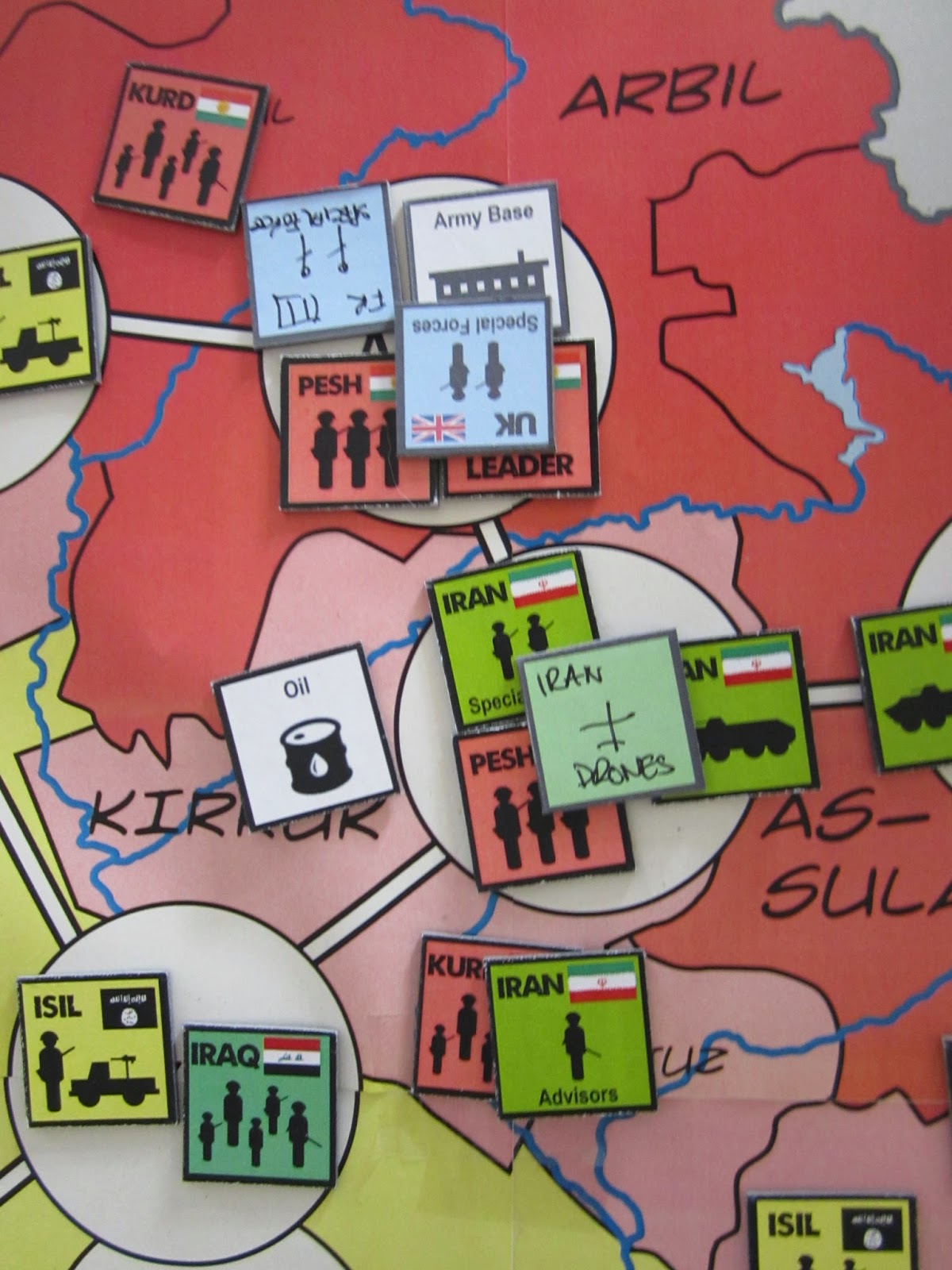 Photo showing Iranian heavy weapons being supplied to the Kurds. Their advisors are represented by another counter.


The USA finally deployed Special Forces to Western Iraq to gain intelligence. This successful action could give +1 on future dice rolls for other arguments.
Iran, clearly moved by the humanitarian crisis started sending aid convoys. Obviously to ensure the safe passage of this aid, Iranian regular army troops escorted the convoys into Iraq


ISIL successes saw a flood of foreign fighters arriving to boost their ranks.
Iraq moved troops towards Najaf ready for an offensive.


Sunni militia moved into Karbala, while the Kurds launched their attack on Mosul. IS fled from the Kurds, but strangely enough a retreat route had been left open by the Kurds.
At the end of the game, there was a general pause for discussion in the game. It was obvious that IS had lost momentum.


The USA realised that the mobilisation of Iraq army units protecting the oil fields in the south left the flow of oil very exposed. So they reacted by sending in international security forces. Of course, in reality, such forces take a great deal of time to organsie. Iran was very keen to deploy troops as part of the UN forces, but for some reason the Iraq PM was not so keen. 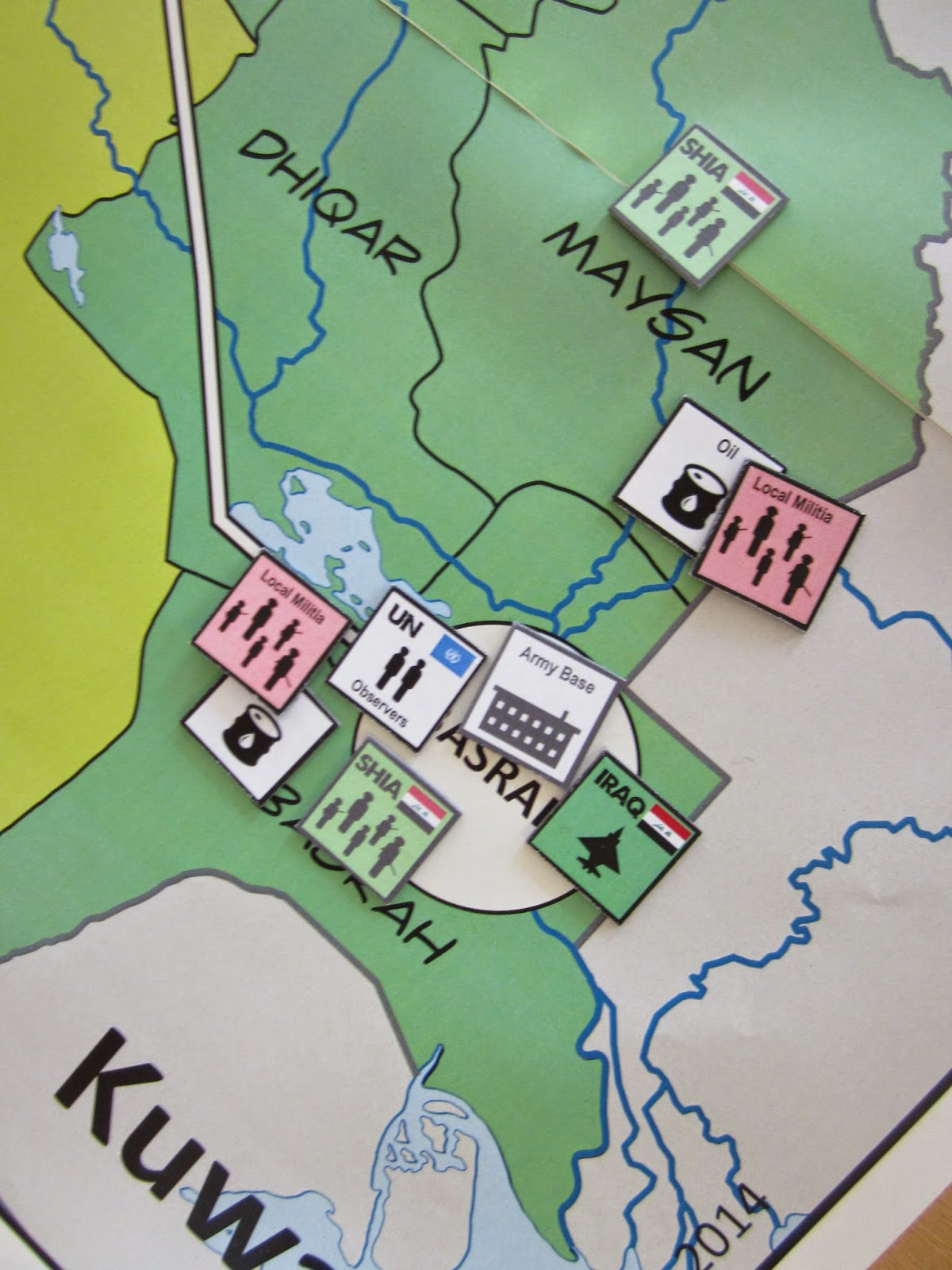 UN forces to help secure the oil facilities around Basra in the south. This was fortuitous ad IS attempted to launch attacks against these targets shortly afterwards.
Iraq launched “Revenge of the Prophet” offensive in an attempt to cut supply routes to the IS held town of Karbala, but a giant traffic jam delayed their efforts. (The last time the Iraq army had a large scale move was into Kuwait).
The Sunni minority suddenly leapt into action and seized Al Qa’Im,cutting the IS supply route from Syria. The Kurds were continuing to drive west, pushing back IS. 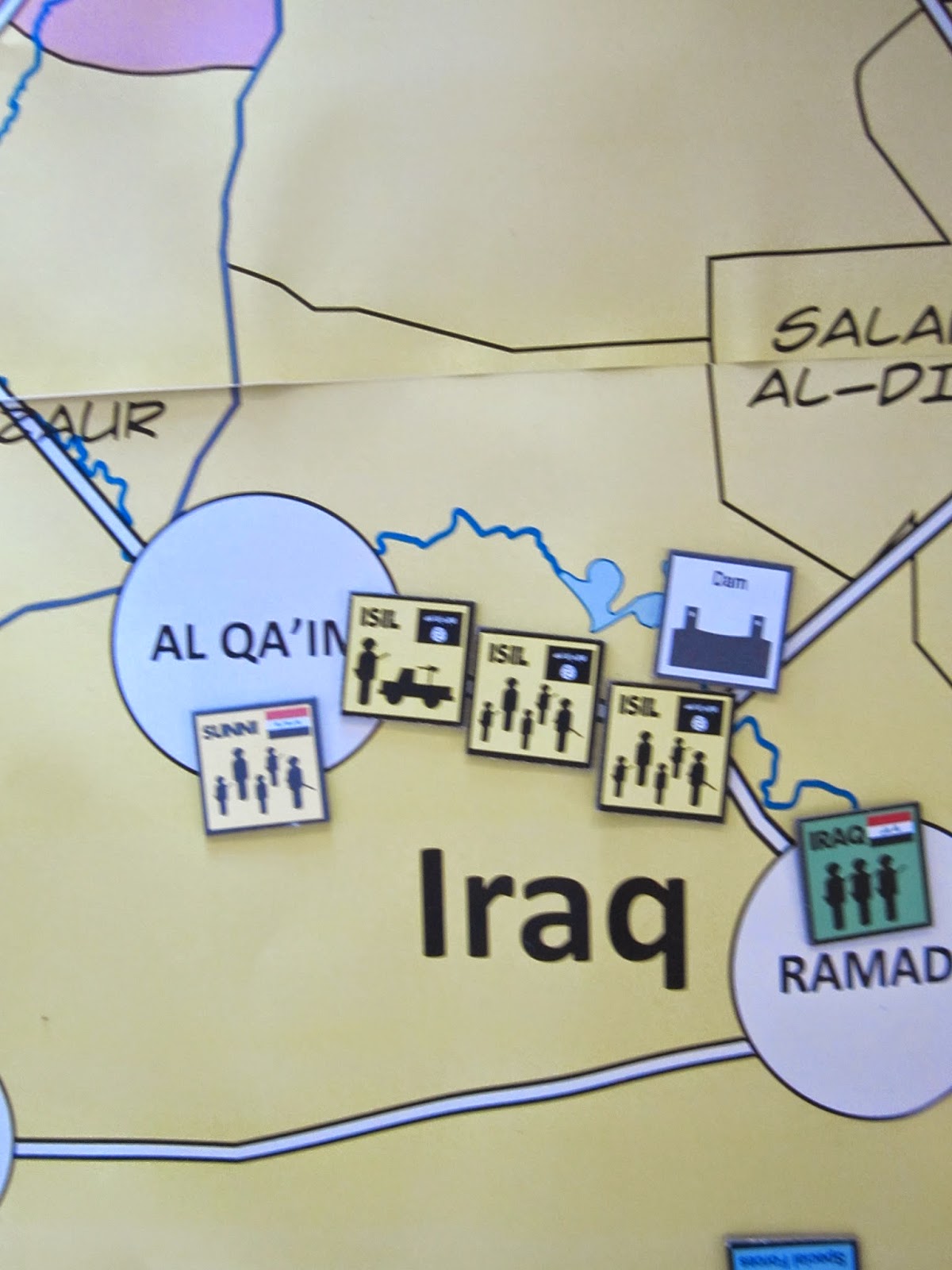 Forces strung out in the desert are very vulnerable to air strikes, if America has the political will. 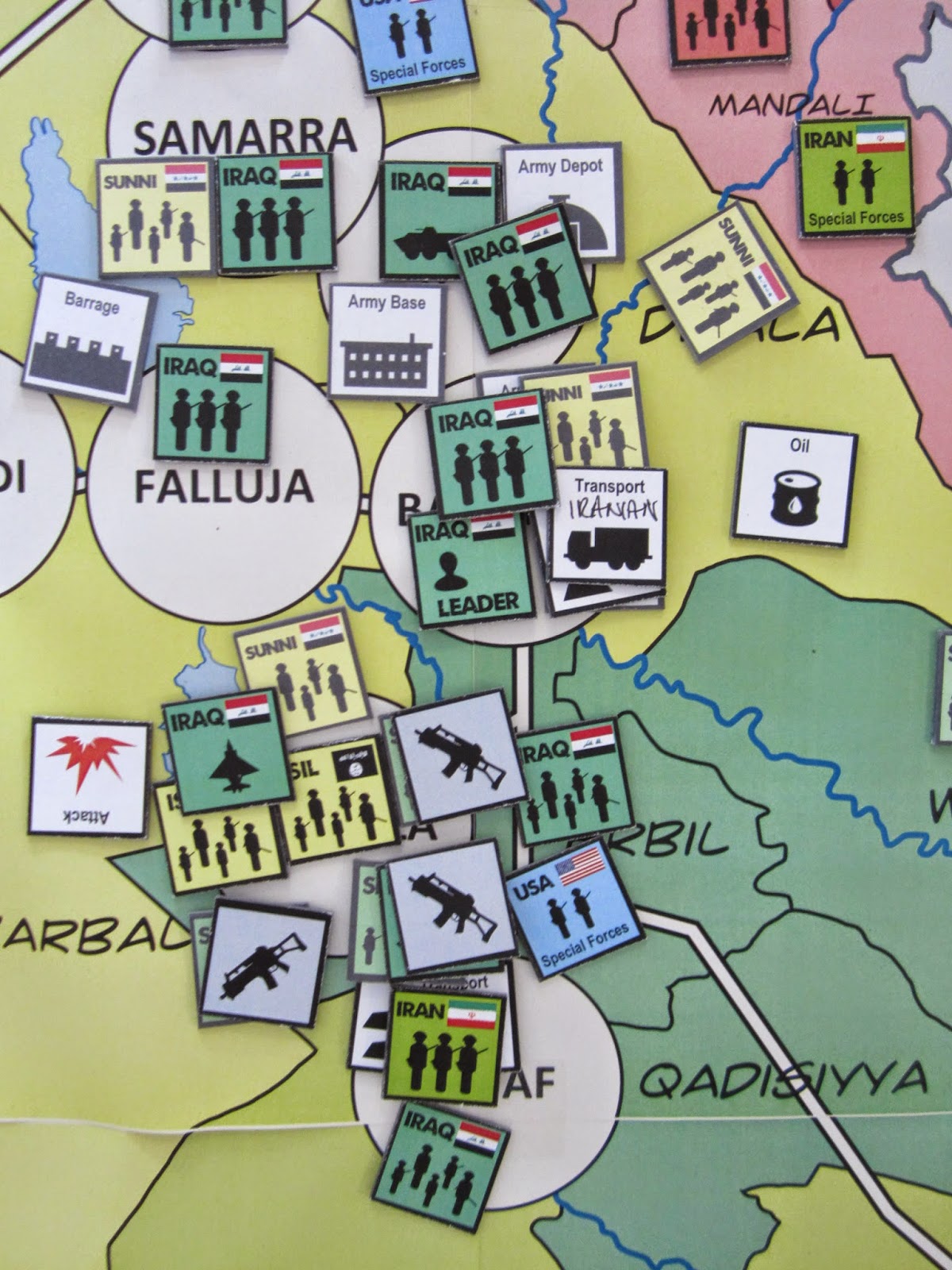 Karbala, the scene of heavy fighting- note the weapon counters on the Shia Militia’s to show they have been equipped with extra weapons.


The Sunni’s moved their forces to Rutbah. While others were involved in military action, the Kurds held a snap election to reinforce their position an independent region within Iraq.
The end of turn discussion centred around how the Iraq government was finally becoming effective, even if the Shia Militias were starting to get out of control.


Turn 6 the Final Turn there often comes a point in a matrix game where the situation is heading towards a new stable situation. IS had been forced back, Iraq had a government, the Kurds had secured their region and Iran had increased its influence in Iraq at multiple levels. However, to drive IS out would take massive preparations and would be another matrix game.
The final actions were:


·         The USA air dropped weapons to Sunni Militia, largely as something to do.


·         Iran argued for the UN to condemn the USA for airstrikes in Iraq, but the game facilitaror felt this was so unrealistic, Iran was allowed to make another argument.


·         ISIL then finally carried out its master plan and Sunni militants took to the streets in Jordan and suddenly IS had a new area to start operating from.


·         The Iraq PM argued for a ceasefire offer and a meeting about creating a council of national unity, but with ISIL represented indirectly by a 3rd party. It was finally balanced if the rest of the government would support the PM, so the facilitator got all the players to vote as it they were part of the government. The PM’s idea was only just carried through and the conference was going to happen. Of course, the various militias wanted to use the final opportunity to retake territory and seek revenge.
Post-game discussion, the Hot Wash Up


Those with relevant experience said the idea of government handling hopping from crisis to crisis was very realistic. One of the challenges of such games is moderating player inventiveness, which is essential to allow them to discover unconventional strategies or ‘black swans’, versus keeping them to exploring the most likely options for each role. “Should the umpire nudge the game back onto the expected narrative?”
Other questions included, “how can a power shape the narrative in the information age?” “Is there a conflict between bringing the game to a satisfactory narrative conclusion and breaking the game earlier when the makings of a key discussion appear (e.g. in this instance IS motivation)?”


The players all agreed that in the end the Iraq Civil War would only be solved by secret deals to conclude a peace.
“It was a good demonstration of the utility and of the capability of such a tool. A learning experience, really!”


The final words go to a specialist in international matters: “I'm not a huge fan of Matrix games but I felt the level of buy in and expertise really pushed this one along, with some great ideas for further development. I'd definitely play this one again.”
Notes: this game was run for the purposes of increasing understanding of a complex, difficult and terrible situation. It was not run for recreational purposes.

Posted by John Curry Editor History of Wargaming Project at 10:00