This is an early example of an early professional counter insurgency game written for the Pentagon to explore gaming an uprising in an urban area.
The game is a multi-player megagame representing a growing urban crisis. The government have their police and the general support of the population. The key is to position the guards at the threatened critical urban infrastructure to increase the chance of detecting bomb threats. They also have their secret police to attempt to discover who the insurgents are.
The players representing the public have roles from factory owners to middle class shop keepers.
They have to maintain their income, in the face the growing insurgent threat. At the end of the game, they decide the winner by pledging their support either to the government or the insurgents.
he insurgents have to try and sway the population, but at the same time, disrupting the cities economy. Of course, they can only do this if they remain undiscovered.
Included are detailed briefings for the government, the public and the insurgents. The book also contains after action reviews from the games, along with an analysis of 20 key uprisings.
This book is published by the History of Wargaming Project as part of its ongoing efforts to document professional wargaming.

This is the latest book to be published by the History of Wargaming Project
Matrix Games are an established way of running seminar type narrative games in the professional environment. This handbook is the most comprehensive set of papers to date on their use in education, training, research and innovation.
The book starts by exploring the origins of Matrix Games, with contributions on the development of the method.


The second section of the book has a sample game about NATO and Russian posturing on the Baltic Sea. Many wargames explore war in this contested area of sea, but a Matrix Game is used to explore a conflict short of kinetic.
In the theory section, some of the underpinning philosophy of Matrix Games is outlined by Chris Engle, the inventor of the method. Along with some of the emerging themes from using narrative based games.


Education has applied the technique of Matrix Games in teaching. This section includes examples from around the world from language training to military education.
The final section outlines more applications of Matrix Games including operational analysis problems, innovation and using a Matrix Game to explore contemporary conflict by Professor Rex Brynen.


Section 1: The History of Matrix Games


The American History of Matrix Games by Chris Engle


The Rise of Professional Matrix Games by Tim Price


The Australian Perspective by Todd Mason


Section 3: The Theory of Matrix Games


Walking in the Dark: An Allegory of Knowledge by Chris Engle


The Intellectual Underpinnings of Matrix Games by Chris Engle


Verbal Algorithms and the Human Machine by Chris Engle


Using Matrix Games in the Classroom by Dorian Love


Effective Learning at the Swedish Defence University by Johan Elg


Gaming the Wars of the Future by Chris Engle 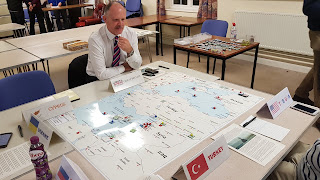