The situation. I was at a major IT security conference that focused on strategic issues including cyber-warfare. The first three days demonstrated most countries are developing plans to deal with the threat and many, including the UK, are building cyber weapons as fast as the programmers can go. A new cold war based in the cyber world has started.

The conference organizer strode up to me with a look of despair. One workshop presenter was still on the plane between Switzerland and the UK. So with an hours notice to prepare a session, what could I do? The answer was play a cyber war matrix game.

International audience, most not gamers, generals, civilian analysts all grappled with the idea of playing a game. Fortunately, I had the second edition of my latest book with me. Co-authored with Tim Price, Dark Guest, Training for Cyber War, gaming internet based attacks, vol 1 has the simplest possible training games around this new domain of warfare. So I pulled the matrix game out of the book, prepared some briefs and off we went.

The game was loud, confused, engaging, the audience loved it. They asked me back next year to present some more cyber wargames. My only comment is that some of the countries representatives were very quick to think of offensive cyber war tactics... 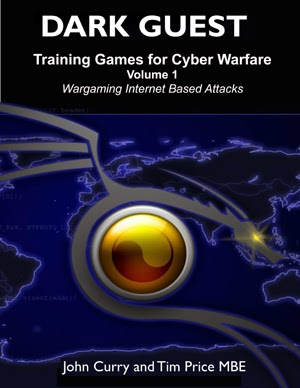 Posted by John Curry Editor History of Wargaming Project at 12:27 No comments:

I will be at this show with a large range of wargaming books.