New book published by the History of Wargaming Project. link

The back cover says:

"You will benefit from this book if you are a practitioner of the art of serious wargaming. Done well, the simple act of putting players in an immersive environment, asking them to make decisions and then face the consequences of those in a dynamically evolving narrative generates astounding insights and internalises learning objectives. Yet, as Clausewitz said of war, everything in wargaming is simple, but doing the simplest thing is difficult. This book explains the seemingly simple. It is a detailed guide to designing and delivering successful wargames, whether you apply the technique to Defence, other government departments, business, the emergency services, academia or humanitarian operations. This is important because good wargames save money but, first and foremost, they save lives.


In his book, Graham Longley-Brown draws on his first-hand experience and those of leading professionals around the world to tell the story of wargaming best practices. From delving into the nature and applicability of wargames (they’re not just for the military), to building the best teams for producing and managing them, to articulating the life cycle of a successful game, it is a story which will prove invaluable for professional practitioners of wargames for both security and business.
Peter Perla, author of The Art of Wargaming


This book offers a cornucopia of invaluable information and ideas based on Graham Longley-Brown's decades of hands-on experience in designing and running professional wargames. There are extensive contributions from other experts, making the book a gold mine of insights from across the global wargaming community. It is essential reading for anyone wishing to use this increasingly prominent analytical and educational technique.
Professor Philip Sabin, author of Simulating War


Soldiers take great pride in being physically fit. Sport plays a major part in Army culture. But fighting power comprises three components: physical; moral and conceptual. The physical component is important, but the conceptual component is the decisive and campaign-winning differentiator: in war, the winners are the thinkers, the rest are losers. Wargaming is not only a directed element of the military planning process, but it also provides a fitness training programme for the brain in which every thinking Army officer should engage. Anyone involved in military thinking, or indeed any form of tactical or strategic thinking, from government to business, will derive huge benefit from Graham Longley-Brown’s excellent exploration and explanation of the (often neglected) art of wargaming.
General (Retired) Andrew Sharpe CBE 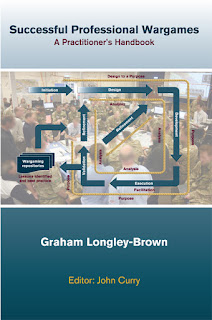 David Rowland's The Stress of Battle: Quantifying HumanPerformance in Battle for Historical Analysis and Wargaming

As part of the History of Wargaming Project’s continuing wargaming ‘archaeology’, agreement was given to publish this set of rules as an example of the US Naval War College’s use of wargaming as part of their curriculum in 1969.


What is interesting about this set of rules is they are complete and they have a sample scenario which helps illuminate the thinking of the wargame designers. There are straightforward rules for surface-to-air missiles (SAMs), gunnery, air, torpedoes and mines etc. The use of these rules is clearly illustrated in the sample game. The rules were clearly written for others to play the game, even in the absence of the game designers.

The sample game gives the background and briefings and the two sides ORBATs. Then it sets out the plans of the two sides. It goes on to set out how the game is setup, managed and played. The rules are supported by numerous examples of the forms used to manage the game, such damage assessment flowcharts and surface to air missile assessment flowcharts. There is sufficient information for the modern wargamer to understand how the game was conducted or to recreate the games for themselves.

Having gamed the full range of potential attacks on Australia, my key conclusion is: apparently no-one cares if a 3rd party supported by another 3rd party occupies Australia. I will, of course, assume that the Australians care, and New Zealand cares (as it cannot survive long term without Australian support).

Australia is seen as of limited interest to most of the world. I will give an example, in 1967 their Prime Minister Harold Holt disappeared without a trace. No-one outside Australia apparently even noticed. It has not improved since. A quick look at the BBC news pages shows the Australian coverage is usually at a fairly trivial level.

On July 13th 2019 the respected Australian Strategic Policy Institute said “A new cold war will force changes in Australian behaviour” and “A new cold war with China is playing out in all but name. Australia will be at the front line…” This is serious stuff, but no-one outside Australia has picked up on the story. When I looked, Google found no reference to this story in English in Europe. This is clearly a political failure of Australia’s political leadership to connect with the Europe and North America.

Australia has strategic importance; in a general war as a forward unsinkable base; in small wars or counterinsurgencies the Australians are very good allies in that sort of thing. However, I assume Australia is largely ignored for geographical reasons - it's so far down that bottom right hand corner on a standard world map used in the UK- and culturally I speculate that its main exports aren't seen as being as serious or impactful as those from the US, UK, or Europe. Of course these factors have nothing to do with its actual relevance, especially considering the nature of the political or cyber or economic "terrain" in a new Cold War will be completely separate from any physical considerations.

So, my conclusions from my game-based analysis are nothing to do with planes, tanks, subs, cyber or trade. The key strategic problem of Australis faces is engaging the Western World to support Australia in this new cold war. If it fails to do this, it is game over.
Posted by John Curry Editor History of Wargaming Project at 03:54 7 comments: