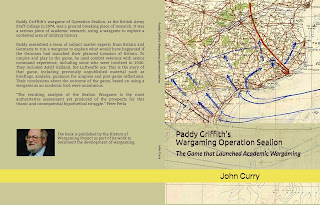 In this book we describe how to design professional games for disease response.  We cover all forms of disease, from chronic and non-infectious diseases to bio-terrorism events.  We intersperse discussions of game design with examples of games, from games on mental health services to naturally occurring infectious disease outbreaks.  In addition we discuss aspects of disease response that you need to understand in order to avoid common pitfalls in designing these games.

The book is available direct from Amazon

This book is the first of a new series, each volume explores a particular area of warfare through the use of wargames. Each game has been crafted to examine different aspects of the conflict. Playing these games, along with reading the supporting designer’s notes, aims to help the reader actively develop their understanding through experiential learning. The goal is to help them develop a deeper understanding than from just reading primary and secondary sources about the war. Reading memoirs and commentary is essential, but so is making command decisions, such as looking at the conceptual map of the Falkland Islands and pondering how close to move the British aircraft carriers to the land action. It is in this space that wargaming rules supreme in the taxonomy of interactive learning techniques.

Game #1: Matrix Game- where it is possible for the wider conflict to be resolved without a land battle on East Falklands.

Game #2: The Falklands War: Task Force Commander- looks at the decisions made by the Royal Navy to support the amphibious landings and subsequent advance to Stanley. It is essentially a game about naval risk management.

Game #3: Battalion Commander- explores the land battle; often decisions in the planning stage set out the path to subsequent success or failure.

This includes a sample scenario the Battle for Goose Green

The book is published by the History of Wargaming Project as part of ongoing work to document the development of wargaming.

I started work on this book approximately 30 years ago in a series in the Nugget, the Journal of Wargame Developments. As a result of lockdown, the book is finally published.

It is available from Amazon and other online book stores, including for the Kindle.

Medieval warfare is part of our culture. However, there are severe limits to our current understanding of the conduct of military campaigns culminating in sieges and pitch battles during the medieval era. This book is an attempt to develop further understanding of some aspects of the medieval military reality, in particular around the operational and tactical scale.

It looks at the medieval operation art of war such as the numbers involved, scouting, logistics, march rates and the length of the campaign season.

Then it looks at the medieval battle; how armies deployed, advanced, fought, won and lost. The many topics include dressing the ranks, the advance to contact, battle cries and pre-battle speeches.

The third section explores sieges and street fighting. such as the lengths of sieges, success rates. and the practical details involved in storming a castle.

This book is written from the perspective that there was a medieval art of war. War took time, effort, planning, logistics and skill to initiate, conduct and win. We assume that the medieval warrior largely knew what they were doing and if we do not comprehend the decisions they took when waging war, this reflects our lack of understanding, not theirs. This book aims to fill some of the gaps in our mental models of the medieval warfare.

Game #3: Once More unto the Breach: Skirmish Rules

Email ThisBlogThis!Share to TwitterShare to FacebookShare to Pinterest
Labels: medieval

Co-authored with Nick Drage, this is an exciting new handbook covering the emerging battles in cyber space.

Cyber security is one of the big challenges of the 21st century. Failure to meet the threat can have major consequences for the individual, a company, an NGO or a nation state. The cost of cyber crime is in the billions of pounds per year. Cyber wargames are an essential part of the training cycle, education and operational analysis needed to rise to meet this threat.


This handbook aims to fill a gap in the training for cyber-attacks and cyber warfare. By providing worked examples of different types of manual cyber wargame, including aims and objectives for each, it provides a basis for the reader to understand the potential range of games on offer. It also helps educate clients about the different types of cyber wargame available and can help them procure the right type of game in order to meet their needs.


Cyber wargaming combines two complex fields:  wargame design and cyber operations.  This handbook is full of examples of such manual games. It includes examples of:


Example of a Matrix Game


Media Wars: The Battle to Dominate the Information Space


Attack Chain modelling
The book is full of additional information for the reader, such as how a cyber conflict might develop or what the key decisions C-Suite leaders need to consider when faced by a sustained cyber attack. 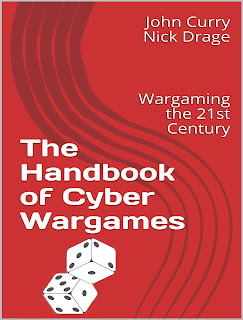 Message of hope from a gamer in China

I was most touched to receive this email from a gamer in China I know. So I thought I would share it.

This is Frank from MiniWarfare, China. You received this letter because your email is in my contact book. Among you, there are rule writers, manufacturers, retailers, editors, in US, UK, Italy and so on.


As far as I know, things are very bad in America and Europe. The government asked businesses to shut down and work from home, just as China did 2 months ago. You are in a very difficult time but what I would like to tell you, do not panic, it will be OK.


You know, things are getting better in China. My province has basically returned to normal work. The children will return to school in two weeks. Now we don't need to wear masks outdoors.
In your countries, the population density is lower than in China, and the medical conditions are better than in China, so don't be pessimistic, we can make it, so can you.


Wish you healthy and happy, all of you!

Email ThisBlogThis!Share to TwitterShare to FacebookShare to Pinterest
Labels: pandemic

Lessons from a pandemic game

In May 2019, I was the lead umpire in a game about a pandemic in the UK. The game was a committee game, largely free kriegsspiel. The decisions made in the game reflected those being made in the current situation in the world and are not that interesting. What is perhaps more interesting were the wider decisions in the game.

The Welsh government used the opportunity to get a better settlement from the UK government, the Scottish declared independence in the belief London could not retain control and Russia threatened the Baltic Republics; intending to seize them while nato nations were fully tasked with the pandemic.

Of course, games are not predictive; wargamers use the shared experience of the game to explore the potential.

However, now we are in a real pandemic, the possibilities of real world scheming in Cardiff, Edinburgh or Moscow are now looking less like some wargame fantasy.
Posted by John Curry Editor History of Wargaming Project at 09:06 4 comments:

One of the ways of creating a model of the decisions states make facing a pandemic is using Confrontation Analysis- the Card game. This views the potential choices as cards in the government hand which can be played or not.


For example, the government can play a card- “mobilise all nursing students and direct them into hospitals to create a pool of reserve nurses!


The factors in this this situation are:


Impact on virus + 2 (it would help fight the virus)


The pandemic has stages e.g. Contain, delay, pandemic, recovery. Each stage may have a different score. These are listed in order.


e.g. The card mobilise nursing students looks like this:


Special- Universities -1, if universities paid for absent nurses score is 0 but extra -1 to impact on economy.


It does not take long to generate a whole series of cards that can be used to inform a discussion about what choices governments have at each stage of the pandemic.
Posted by John Curry Editor History of Wargaming Project at 12:58 8 comments: