Bristol Wargaming Society, my local club, were pondering the world of wargaming; who had contributed to launching the hobby we all enjoy? Actually, there are only a dozen or so people who were instrumental in those pioneering days of the 1960’s, 1970’s and 1980’s. The club wanted to arrange a local event to celebrate the contribution of WRG, in particular that of Sue Laflin-Barker and Phil Barker. So I found out when Phil and Sue were passing Bristol and invited them along to the day’s celebration and to mark the launch of Sue Barker’s new book, An Introduction to Ancient Wargaming using DBA 3.0.

The centre of the day consisted of a small DBA competition using DBA 3.0. DBA is very suitable for multi-game competitions, the games do not take too long and so the loser can rapidly field another army in another game in an attempt to exact their revenge. 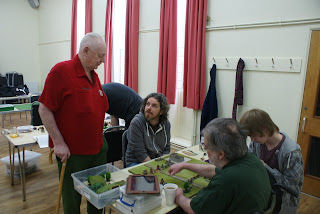 DBA 3.0 game being played under the watchful eye of Phil


The day was also the opportunity of people to play DBA against Sue Barker in some friendly games (She used the figures and scenery from her new book). Sue demonstrated that German warbands were a formidable force against Roman blades. (If a blade is forced back by a warband it is destroyed). There were also tutorials on DBA 3.0 for the uninitiated. 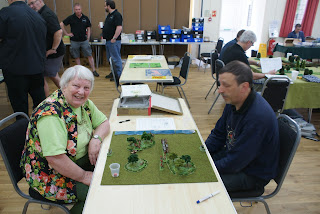 Nick Pope, the club chair, looking despondent after being beaten by Sue
Some local clubs put on DBM participation games to demonstrate the rules and to encourage people to have a go. 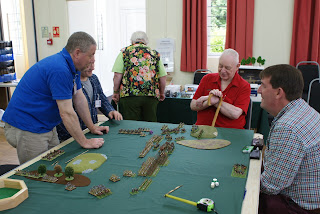 One of the DBM games put on by the Abbywood Irregulars
The Hordes of the Things (HOTT) is a popular micro game, allowing fantasy armies from all genre’s to fight it out on the table top. The club expert spent the day showing people the rules and playing a series of friendly games. 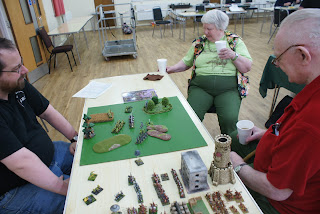 Playing HoTT against Sue and Phil
The Barker’s wandered around the event chatting to people in the way that dedicated wargamer’s do, browsing the various trade stands. People took the opportunity to get them to sign various books and rules by them to the extent their arms started to get tired! 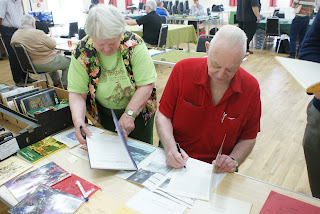 One table that caught everyone’s interest was the display showing a portion of the 55 set of rules/ books published by WRG from 1969 until today. 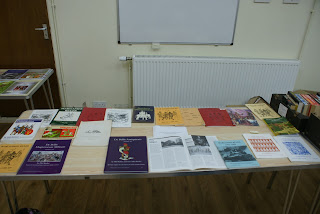 Some of the 55 books published by WRG
The event was only designed as a local event, and it grew somewhat beyond the original plan. Many people contacted us afterwards and asked if we could repeat the event, on a larger scale, with more publicity. Several WRG 6th edition ancient enthusiasts were particularly ‘miffed’ they were not able to demonstrate one of the classic games of ancient wargaming.


It was very successful day, Phil and Sue enjoyed themselves.
Posted by John Curry Editor History of Wargaming Project at 01:30 4 comments: