Wargaming at the RSA at Cities 2050 Conference, UK

When asked if I knew anyone who could run a game about the resilience of cities at an invite only conference, I jumped at the chance. I recruited Tom (SO2 Simulations, UK), Stephen (futurologist who deals with the weird as a career) and Russell (disaster planner of apocalypse proportions). The attendees were senior; a few MPs, top executives of major companies, emergency planner for the Nat Grid, Caroline Wyatt (BBC), emergency planner of London, someone from COBRA… The theme of the conference is our cities are getting to become very fragile systems. One problem and the city descends in chaos. The water stops and within 2 days the city will have to be evacuated as it becomes a waterless desert. 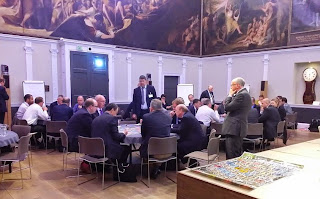 An extreme example was the Fukushima nuclear reactor in Japan was protected by a 10m wall, which was good, except the tsunami wave was 12m. In the ensuring disaster, the reactor came close to becoming Chernobyl. If it had, Tokyo would have had to be evacuated- all 30 million people of it.


Rather than death by PowerPoint, the conference organisers (Anquan Ltd) wanted some lectures, followed by some interactive exercises. We provided two of the exercises.


The first exercise was considering how cities could be adapted to become more resilient. The player teams were given a giant map; aerial photo of a city, with hexes on it. The terrain in each tile was the predominant use of that area of the city e.g. middle class housing, retail, slums, etc… That was not to suggest each hex only had one type of terrain in it, it was just the main feature. The photos came from Google Earth and standard software was used to superimpose the hex grid. The hotspot tiles were about the size of a UK beermat, as the map was very large. The players had additional tiles they could add to their city, such as mega blocks (dense concentrations of people living in a single building the size of a small town). They were also given examples of future technologies overlays that could help the city function more efficiently. 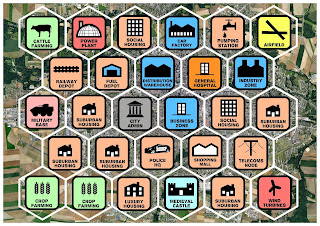 After exploring their city, they were faced with a problem. Due to rising sea levels, the lower regions of Bangladesh suddenly flood and the UN is faced by 85 million refugees. The UK is allocated 850,000 and each UK major city has another 100,000 people arriving over the next two years. The player teams were faced with the unenviable task of dealing with this crises. Due to their expertise, the problems of where to house, how to provide jobs, health care, education were not abstract to them. They understood the complexity of the challenge. Each team then presented their solutions, some hoping near future technology could be their salvation.


The afternoon session was a red teaming session. The groups all moved round one table (except for one person to explain the city to the new group) and then they had to devise strategies to break the city. Most of the participants were taken aback at this twist, but threw themselves into the exercise with gusto. It would be inappropriate to discuss how this assembled mass of expertise identified weaknesses in our city infra-structure.


The conference then carried on, with the delegates having the example city they had developed (and wrecked) to relate back to. What became apparent was the interdisciplinary nature needed to find solutions to the growing problem of city reliance.


So what are the general lessons? Conferences have to develop from the traditional model of one lecture after another; this fails. Devices from wargaming- the hex map, with abstract terrain based on the predominate usage, worked as a tool for visualisation. Adding counters to the map was an efficient way of communicating. Playing the enemy is a familiar concept to any wargamer. It was a wargaming hex map, with counters and an enemy side. Some elements taken from wargaming had made the leap into a mainstream conference.
Posted by John Curry Editor History of Wargaming Project at 06:47 No comments: